MOYOLA PARK & WWII
During WWII, a number of American soldiers were stationed on the Moyola Park Estate.

Probably, the best known of these, was the 82nd Airborne Division, United States Army. While their “Command Post” was actually on the site of the golf clubs 13th (which is known as “Yankies Garden”), 14th and 15th holes, in front of Moyola Park House, the memorial was placed in the garden at Gravesend, by kind permission of the golf club. This was to allow easy access for anyone who wanted to visit or pay respects. Two such memorials, another at Killymoon Castle, Cookstown, were unveiled to coincide with the launch of John McCanns book ” Passing Through”,on VE Day, May 8th, 2005.

Making the occasion all the more special, several veterans travelled from the US to help mark this significant event, it probably being the final time they came to Europe. The memorial is a lasting legacy to the stay of these US soldiers in Moyola Park, Castledawson, before being thrust into the fiercest battles of the Second World War……. 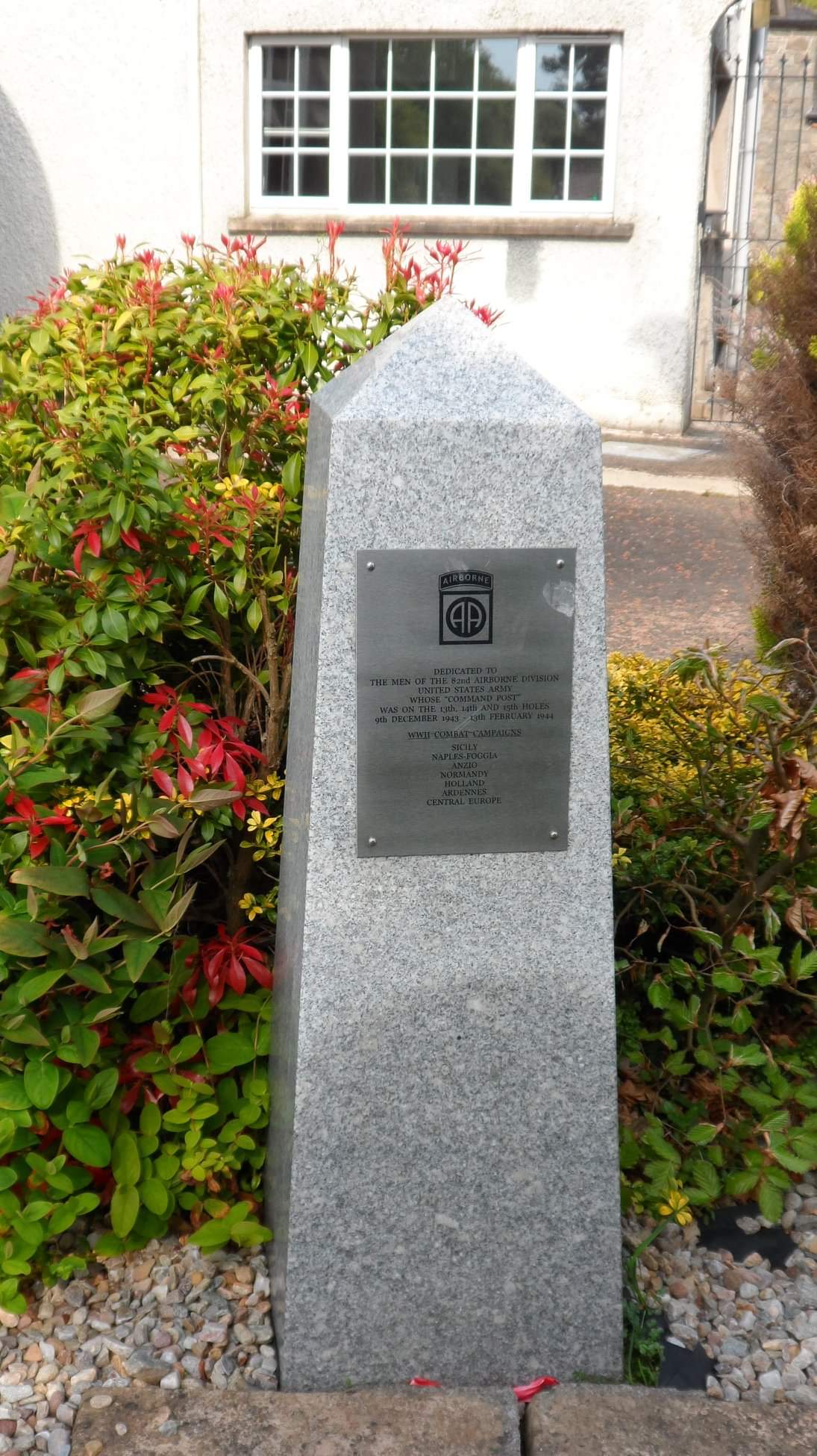 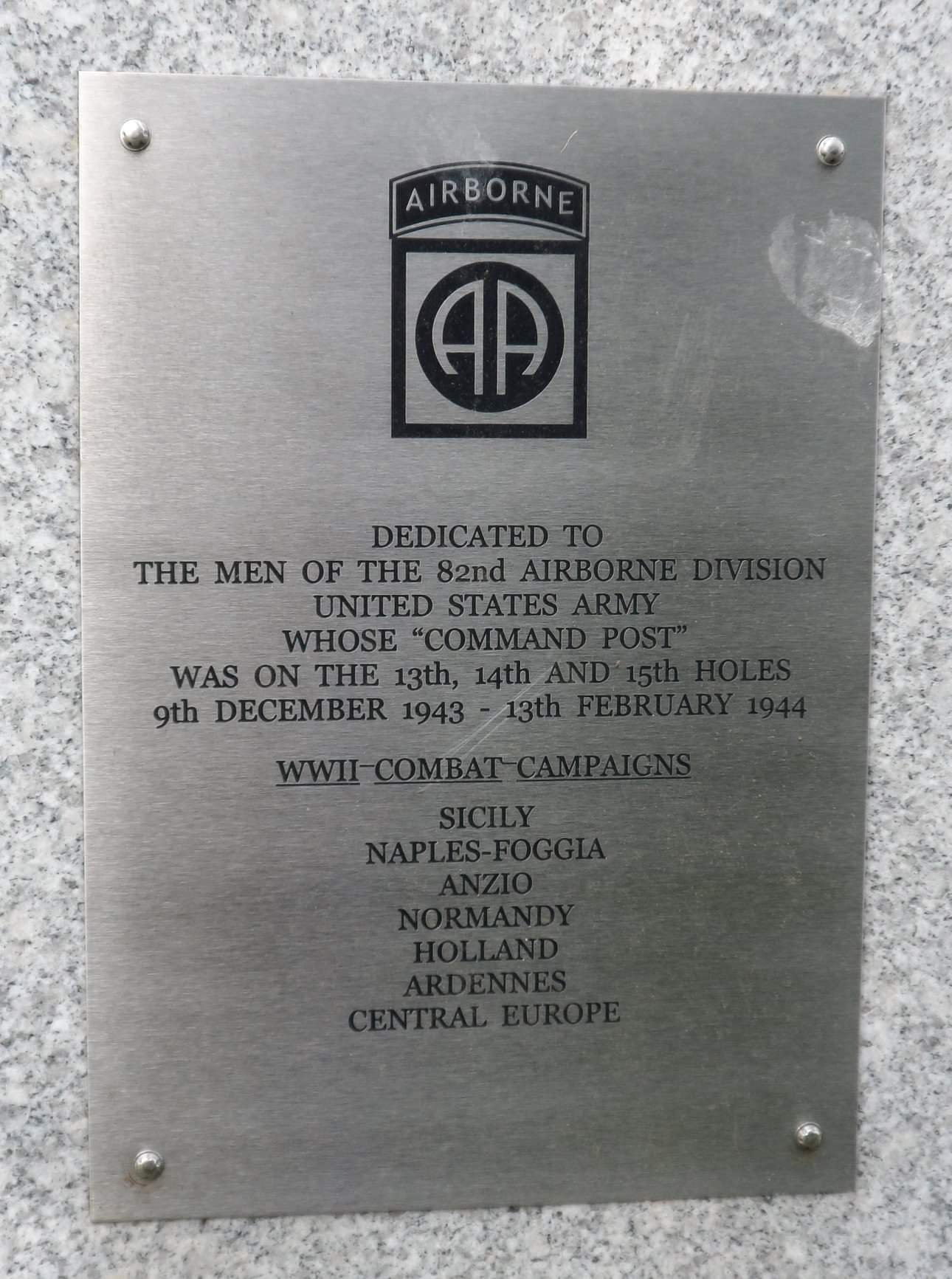 It was in the 1960’s when Mr. Thomas M.Glass Ph.C.,M.P.S,a well-known local businessman had a vision, a dream some might say, to bring the sporting world of Golf to the South Derry community and surrounding areas.

Mr. Glass formed a committee of those that shared similar interest and set out to make his vision a reality. The committee researched and surveyed many locations within the South Derry area, settling on the scenic surroundings & area of the Glenshane Pass.   The difficult task of approaching & agreeing planning permission with the Dept. of Environment, to allow the construction of a Golf course on such beautiful landscape lay ahead of Mr. Glass and his new formed committee. After many meetings & deliberations with the Dept. of Environment and the committee, the dream was not to be. It was decided that the ambitious, enterprising venture was too great a financial risk.

In 1975 Mr. Glass was approached by Lord Moyola to gauge the local interest towards the construction of a Golf Course on his estate located within the village of Castledawson,

There was no time to waste. Mr. Glass, contacting as many as possible of the original committee called a meeting that was staged within Walsh’s Hotel, Maghera on the 27th November 1975. He reported to the committee that Lord Moyola was contemplating constructing a Golf Course on his Estate, Shanemullagh, Castledawson.

Those present were once again enthusiastic and a new Committee was formed. The new committee consisting of:

On the night of 27th November 1975, Moyola Park Golf Club was born.

The first Moyola Park Golf Club Council was formed and held their first meeting in the Clubhouse on 17th. January 1977.  Eleven Ladies were present at the Meeting and on this date the first Ladies’ Committee was formed. This consisted of: ­

This incredible journey began with appointing Golf course architect, Mr. Don Patterson assisted by colleague Mr. Sam Allen as consultant. Tasked with sculpting out a first class golf course from the incredible landscape of Shanemullagh Estate, the first nine holes were completed in the spring of 1977 and the first Competition played over those nine holes on 7th. June 1977. Work was well under way on the 2nd nine and the completion of a first class 18 hole Golf course was soon to be completed.

On the 9th September, 1977 Moyola Park Golf Club was officially opened by Mr. Don Moncrieff and was followed by an exhibition match featuring Christy 0’Connor Sen., Paul Leonard, Barry Brennan and Norman Drew. At that time Moyola Park had 266 Members and the full 18 holes were open for play.

Great credit is due to Lord Moyola for constructing the Course and providing such an excellent amenity in this area. Credit is also due to the Contractor, Mr. Colm Mulholland and the ground staff for their hard work and many hours to achieve one man’s dream become a reality.

On the 9th August 1979 Moyola Park held its first Pro-Am. With 54 of Irelands leading golfers taking part, no one came under Par for the course. The winner was Phil Posnett, with level par 72.

The next major development occurred on the 7th. November1979, when the Council Members were advised that Lord Moyola would consider selling the Clubhouse and giving the Club a 90-year lease of the Course. After lengthy discussion, t was decided, on the 3rd March 1980, the Council bought the Clubhouse, secured a 90-year lease and undertook the maintenance, organization and upkeep of the Club­house and Course.

The Clubhouse, known as ShaneMullagh, is a superb Georgian House set in beautiful gardens, surrounded by touring tress. It required the minimum of renovation to become a first class Clubhouse and focal point of the complex. The lovely old house has all the beauty and charm of a by-gone age, and while a large function room has been added towards the back, it does not spoil the character or beauty of the house.

As one of Ireland’s youngest Golf Course, Moyola Park has grown and matured during its short golfing life, though over the years it has seen many great developments that is sure to test the most skilled of golfers all over Ireland and beyond.